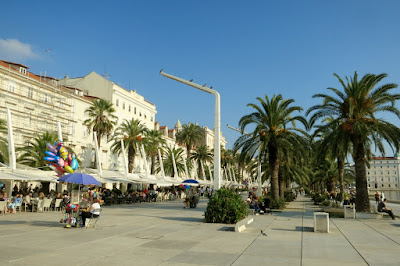 Again a really nice day, but we felt that we had come a little further north. The wind was cooler.


After lunch we went to the old town -  10 minutes walk from the cruise port.
Split was originally built as a castle in the year 300 but it was 400 years later transformed into a city. An elegant promenade with palm trees (picture). We walked around town looking at the sights. An old town with very narrow streets, palaces and church walled.


Back on the ship, we got a coffee and then we went around a bit.


A glass of wine before dinner. After dinner, we decided on a manhattan cocktail in the lounge before the suitcases were packed.


The suitcases were outside the door before 11pm, so they could be amassed during the night.

Posted by Mogens Hallas at 1:33 PM