The flight to Venice

We were up at 5:30am and went over to the airport at 6am. The breakfast restaurant was not open and we had to eat breakfast in the SAS lounge.


We checked in for the SAS flight to Berlin. Since Alitalia is not in the same alliance as SAS we could not check in in CPH - it had to happen in Berlin.


We landed on schedule and there was a waiting period of approximately four hours. We could not check in at Alitalia flight until two hours before departure, so we found a lounge and got a cup of coffee. 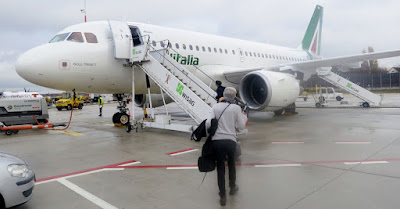 At 10:40am we were ready to check into Alitalia AZ 439. Here they could only find one of our two suitcases. Not fun, having to cruise with half of the clothes, so we spent a little time calling for SAS ground handling in Copenhagen to ensure that the suitcases had been on the flight to Berlin Tegel and convince Alitalia that they had to find the other suitcase and make sure that it came by plane to Venice. As we walked through security, we still didn't know where no. 2 suitcase was.


A nice flight and landing in Venice about 10 minutes late.


And so to the baggage carousel - and happy we were when both suitcases appeared. Originally we had planned to take a water bus (Alilaguna) from airport to Cruise terminal, but due to the late arrival we had to take  a taxi. Quickly we found a taxi that drove to the 20 minutes to the cruise terminal.
Posted by Mogens Hallas at 1:27 PM